by Editor TTNow
in Weird News
1 0 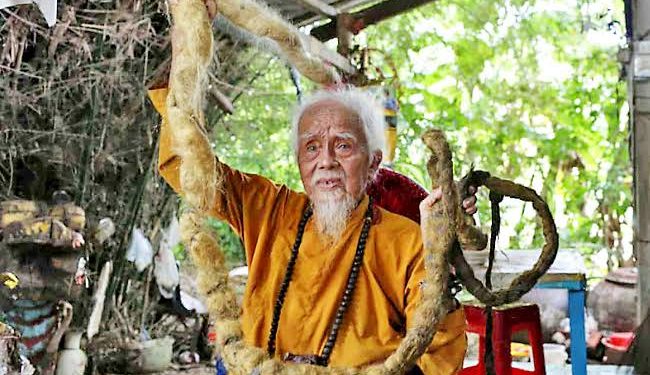 A 92-year Vietnamese old man has gone almost 80 years without a trim or wash. Nguyen Van Chien, who believes in a faith that things a person is born with should be kept untouched which made him a proud owner of five-metre-long hair.

“I believe if I cut my hair I will die. I dare not to change anything, not even combing it,” Chien mentioned and futher added “I only nurture it, cover it in a scarf to keep it dry and clean and looking nice.”

“I touched my hair and overnight it has become really hard. It has attached to my head and became a thing of its own.” Said Chein.

Chien follows a faith known as “Dua”. Dua is the coconut religion named after its founder who claimed to have survived on coconuts only. The now-obsolete faith is banned in Vietnam and is categories as a false belief. The long haired old man worships nine powers and seven gods and believes that it was his calling to let his hair keep growing and he ties it in an orange turban.