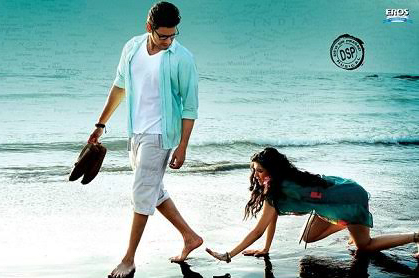 The movie poster is perhaps the oldest and the most popular attribute when it comes to marketing a film. A merger of art and commerce, movie posters must sell the “product” while simultaneously remain faithful in delivering the spirit of the film. In today’s generation, a movie poster will reach the entire world within a day or two, thanks to the social media platforms and video streaming services which are connecting filmmakers and audience like never before.

However, sometimes the movie posters might create few unwanted controversies, Especially in India where Public Romance is outrightly not encouraged. Here is a list of 9 Most controversial Telugu Movies posters in recent times.

Reason : Lead Cast were Kissing each other in the posters, which were sticked to RTC buses and Bus Stops.

Result : Media networks and politicians raised objections. Posters were removed from everywhere and few politicians even called for a ban on movie.

Reason : Kriti Sanon was seen crawling near Mahesh Babu’s feet in the poster.

Result : Few Female celebrities and activists raised objections on the poster. Mahesh Babu clarified that it was unintended and apologized to the public. However, no one had any objection after the movie was released, as Kriti plays a desperate fan role in the movie which explains the poster completely.

This movie was a bold attempt for a Telugu movie. It was marketed as the first telugu Adult sex-comedy movie. However, unlike the others in the list, the filmmakers expected the heat and Criticism in prior and converted into publicity.

Businessman is undoubtedly an amazing movie. However, the Mahesh Babu starrer was certified A due to its abusive language and sensual scenes. Even posters were the subject of Controversy during the time of release. Though, there is no objectionable content in posters, the fact that a top star like Mahesh Babu is being intimate in movie posters was a bit weird.

The yet to be released Akash Puri’s Romantic has too much romance for a young actor like him. Though not much about the movie is known. The released posters were a bit objectionable, considering the fact that both the actors are very young.

This movie created lot of Controversy with its title, poster and trailer. Many media networks and hindu community groups raised objections before it’s release. Inspite of all the attention it got, the movie tanked at Box office.,