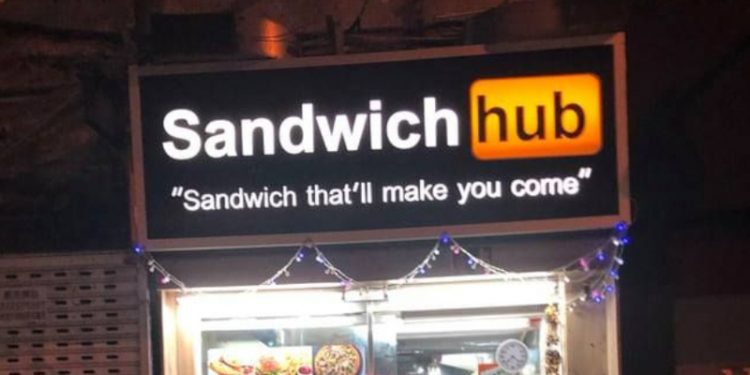 Outside eating has increased rapidly from past few years in India. With the support of delivery apps like Swiggy and Zomato, many new restaurants are adding up all over the country. With increase in Restaurants, people are finding it difficult to name their new restaurants. In order to look unique and catchy amidst the competition, restaurant owners are opting for attention grabbing names. This unique names are not only grabbing the attention but also pulling crowds into restaurants.

From ‘Killing Nemo Restaurant’ to ‘Murg Donald’, here is a list of 20 quirky and funny restaurant names which will make you smile.

Potty is a Malayalam word which comes as Surname for few section of people in Kerala. Potty’s Restaurant is named after a person with surname Potty. However, the english meaning for Potty is well known for all, which makes the name of this restaurant hilarious.

The actual reason behind naming this restaurant is unknown. But, the name does grabs the attention of people.

Translates to : Come to palace sometime

There is a Dhaba in North India which is named as Killing Nemo. The Dhaba owner wanted to convey in a unique way that fish items are available with them. He came up with this hilarious idea which got the attention of many passing customers.

This is a Indian outlet in Hong Kong which serves Indian fast food such as Dosa, Bhel, Vada Pav etc. The owner of the outlet who is also an Indian said that the name, logo and caption of the outlet were inspired from a famous Adult site. We all know what site it is anyway.

This restaurant from Hyderabad has a funny name which has a universal appeal. The owner of the restaurant said that his restaurant is like second wife to people in terms of serving tasty food which is as good as home made food. Hyderabadi people have trended the restaurant in social media for a very long time.

This is the most weird name that can be given to a Tea serving stall. The reason behind naming it is unknown. However, the name grabbed the attention of locals quickly.

This Mumbai restaurant serves western fast food likes burgers and sandwiches. The owner wanted to name his restaurant in a quirky away cherishing the unhealthy food they serve and came out with the name ‘Paapi Paet’.

Murg Donald is a small cafe located somewhere in North India. The logo ann name of the restaurant is inspired from the popular American fast-food chain Mc Donald’s.

A small outlet in Punjab serving local fast food is named as SFC (Sardar’s Fish N Chicken) by taking inspiration from Kentucky Fried Chicken (KFC). SFC also has a logo of Sardar next to it, similar to KFC logo which has its founder’s face as logo.

Translates to : Let’s grow our belly

This is the most funniest and honest Restaurant name in the list. This small food stall in Hyderabad is making headlines with its funny name.

This south Indian cuisine restaurant in Delhi is famous for its quirky name. Owned by a Malyali, the place serves some amazing Kerala cuisine along with other south indian cusines.

Translates to : One who opens soda bottles

Soda Bottle Opener Wala is a popular Irani Cafe which has multiple outlets all across India and it is present even in countries outside India. The history behind naming the restaurant is mentioned in frames which are placed throughout the restaurant.

Translates to : Spared by Sardar

Another Delhi Restaurant with a quirky name. Sardar-ji-Bakhsh is crowded cafe in Delhi which is known to serve great Coffee.

This Indian restaurant in United States has a quirky name which is close to the English word ‘Nonsense’. Apart from the funny name, the restaurant also many dishes with Quirky names such as ‘Chicken Naanwich’.

The restaurant name Originally means Passing via Agra. And we all know what it is hilarious about it.

This is the only name in the list which became hilarious after a spelling mistake. The restaurant name was translated from Telugu to English language. Th resturant is generally called as ‘ Naidu Dum Biriyani Corner‘. But when translating to English, they have written it as Dumb Biriyani.

While we’re not sure whether the Chaat wala here is a graduate or not, we’re sure that he has some witty humour.

This kebab centre is New Delhi wants Allah to run their hotel, atleast their restaurant name says so. Located near Jama Masjid, the kebab shop is well recognised by the locals.

This is very common phrase of Hindi speaking children when they’re hungry. But this most common phrase is used in an uncommon way to name a restaurant.