by Editor TTNow
in People, Sports
0 0 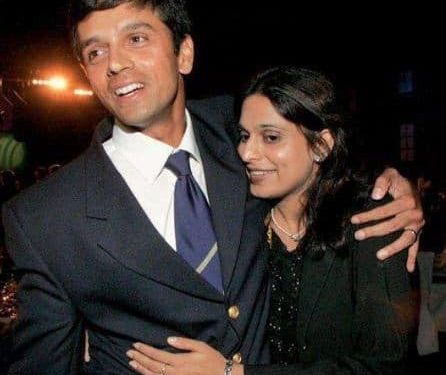 It is a well known fact that Cricket is a religion in India and cricketers representing India has huge fan bases in India and all over the world. The retired Indian cricketer, Rahul Dravid is no exception. He was the greatest test player in his era and has fans all over the world. However, we know very less about his private life, especially about his wife Vijeta Pendharkar, as the legendary cricketer preferred to keep himself private all the time.

When we tried to find out, the details about Vijeta Pendharkar has swept us away. She was born in 1976 to an Indian Air Force Wing Commander. Vijeta has done her schooling from different schools as her father’s work demanded to shift places regularly. She completed class X education from Bal Bharati School in Delhi before her father’s retirement from the Air Force.

After completing her schooling, Vijeta wanted to pursue a career in the medical field and joined Government Medical College in Nagpur where she graduated with a medical degree. She then completed her post-graduation in Surgery in November 2002 from the same college.

Vijeta Pendharkar’s father met Rahul’s family when he was working in Bangalore during the late 1960’s. Their fathers became friends eventually and the families started to grow very close. Meanwhile Rahul and Vijeta developed a strong liking towards each other. As both families are from Maharashtra and were close to each other for years, they accepted Rahul and Vijeta’s relationship immediately.

Initially wedding was planned in 2002, right after the post graduation of Vijeta. However, as world cup – 2003 was approaching, the families decided to postpone the event to give Rahul enough time to practise prior to the big event. Vijeta even toured South Africa to watch Rahul compete in the 2003 world cup. On 4th May, 2003, Rahul Dravid and Vijeta Pendharkar tied the knot in a traditional Maharashtrian ceremony which took place at The Border Security Force (BSF) Training Centre, on the outer suburbs of Bangalore.

The couple welcomed their first child, Samit in 2005 and their second son, Anvay was born in 2009. Samit is pursuing cricket in the footsteps of his father and making a name for himself in U-14 cricket currently.

Gave up Profession to support family.

A medical surgeon by profession, Vijeta Pendharkar would have had an amazing career if she had continued with her profession. Vijeta gave up on her career to take care of their children as Rahul was always away, representing India. After Rahul’s retirement from International cricket, both are currently living a simple life in Bangalore and they continue to stay away from the celebrity attention.

Date of Birth: Not known

Gold Spot Drink : Story of the favourite drink of an entire generation.

Gold Spot Drink : Story of the favourite drink of an entire generation.