by Editor TTNow
in Most Paused, Sports
0 0 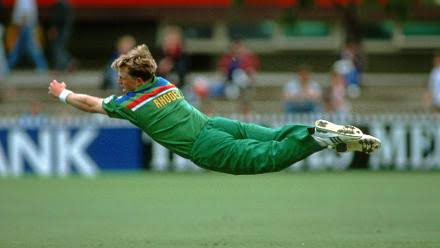 The invention of HD televisions and pausing options in them made sports moments an obsolete notion in the 21st century. With that said, video services such as YouTube, OTT platforms and other video streaming services give us the ability to go back and pause incidents that bewildered our eyes and imaginations and left us scratching our heads. How difficult was the catch taken by him ? How someone celebrated after a close match  ? These are the types of questions that lead us to pause and review certain iconic sports moments.

Here is a list of Ten Most paused moments in cricket history which were both iconic and unbelievable.

Inzamam’s Run out by Jonty Rhodes

During a cricket match between South Africa and Pakistan teams, Inzamam was run out by Jonty Rhodes in a never seen manner. He flew in from backward point, swooped on the ball, and threw himself in the air, and at the stumps, to effect a spectacular run-out of the in-form Pakistani batsman.

Ganguly’s shirt off moment in Lords

India’s most aggressive captain, Sourav Ganguly expressed his joy at India’s hard-fought victory against England at Lord’s after chasing a daunting 326 runs, by taking his shirt off and waving it overhead. Prior to this England player Andrew Flintoff took his shirt off after a win against India in Wankhede stadium.

Sir Don Bradman is the best batsman in the history of cricket. However, his last match was a painful sight. When he came to bat in his last innings against England, requiring a mere four runs for a magical Test average of 100, Bradman was out for a duck on the second ball.

More than Bermuda team, Dwayne Leverock enjoys more fame in the cricket fraternity. All this popularity is due to an amazing diving catch he took at slips, to dismiss Robin Uthappa in the 2007 World Cup against India. A huge personality like him diving like Jonty Rhodes is very uncommon thing in a game like cricket.

Dennis Lillee once walked onto the pitch with an aluminium bat instead of a willow bat. After complaints from the England captain, he grudgingly thrown his alluminium bat and accepted the willow bat handed to him by his skipper, Greg Chappel. This incident became iconic in the history of cricket.

Sachin Walks out it bat for last time

Sachin Tendulkar is more than just a player in the game of cricket. The world sees him as a best all format player, cricket has ever produced. However, People in India see him as a deity. To see a legend like him retire is by no means easy. During a match against West Indies in Wankhede stadium, Sachin announced his retirement from international cricket. This was the moment when Sachin was walking to bat for the last time in his 24 year long cricketing career.

Another mention of Dennis Lille is the list. During a match Australia was bowling to the New Zealand tail during the second Test at Eden Park. Dennis Lillee insisted his captain on having a nine-man slip cordon for the pair at the crease, who were not good enough batsman to hit aggressive shots.

England vs Australia matches are always aggressive and hard fighting. In a true show of sportsmanship, English player Andrew Flintoff, rather than celebrating with his teammates, put his arm around a disconsolate Brett Lee after the latter’s side had lost a close-fought Test match. This is the most iconic scene in history of Ashes series.

This bat gathered a lot of attention when Mathew Hayden player a ruthless knock with it at a 200+ strike rate in a T20 match against Delhi Daredevils. The bat became an over night sensation in all cricketing nations and the moment Hayden lifted the Mangoose after his innings remained iconic.

Lara Kissing the Ground after scoring 400

West Indies’ legendary batsman Brian Lara kissed the Pitch, after crossing Mathew Hayden’s highest score in test cricket. He went on to score 400 runs in this innings and remained not out towards the end.