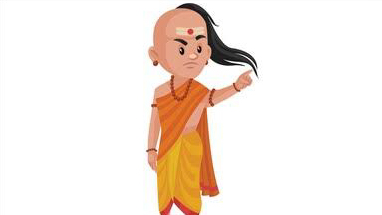 Chanakya, who is also referred to as Kautilya was a widely known scholar and political strategist from ancient India. As per historical records of India, Chanakya lived between 350 and 283 B.C. The author of Arthashastra was the guardian of Chandra Guptha who started the mighty Mauryan empire. Chanakya served as prime minister under him for several decades

Apart from being an efficient Prime Minister, he attended the University of Takshasila as a senior professor. He was a master in the fields of economics, warfare, administration and politics. Chanakya authored books like Neetishastra and Chanakya Neeti, along with Arthashastra. These books served as a ready reckoner for bureaucrats, economists, and politicians for many centuries.

Though many of us are aware of his legacy as a King maker, he was actually destined to be a king himself. The ‘Teeth prophecy’ played an important role in his life.

When Chanakya was born, he had a full set of teeth (canine teeth), which was very rare and Brahmins believed that it is a sign that he would become a king one day. But since he was born in a Brahmin family, the future seemed very inappropriate and his family chose to break his teeth to avoid the prophecy. However, few monks in their society predicted that their action will only alter the prophecy but cannot destroy it. They predicts that Chanakya will make another person a king and will be the power behind his throne.

Chanakya grows up to be a very intelligent and wise man with mastery in many subjects. He always had a deep desire of uniting Hindu kingdoms into one nation in order to fight foreign enemies like Greeks and Persians. As Greeks were getting very powerful back then, he decides to warn Dhanananda, the king of Magadha. He attends the alms-giving ceremony held by King at Pataliputra and advises the court. Inspite of listening to him, the king and other people in the court makes fun of his appearance (teeth and crooked feet).

Chanakya gets banished from the court forcefully which was a very shameful experience for a brahmin like him. The angry Chanakya, vows to destroy the Nandha dynasty which he eventually does with the help of Chandra Gupta. Chanakya’s teeth prophecy becomes true when Chandra Gupta forms the Mauryan empire and names him as his mentor and prime minister of his kingdom.