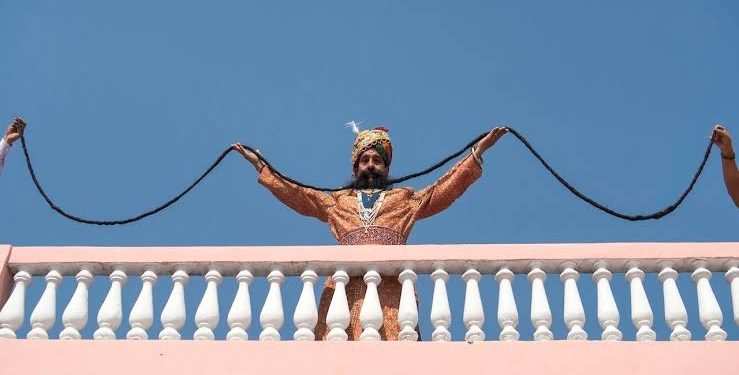 The Guinness World Records or Guinness Book of World Records, is a reference book which is published anually, listing world records both of human achievements and the extremes of the natural world.

Many Indians are also listed in the Guinness world records for doing amazing things. Listed Indian names are from the fields of business, science, sports, technology, medicine etc. There are also few weird world records held by Indians which are very hard to believe.

Longest Turban in the World

Avtar Singh who set this amazing record is from Patiala of Punjab State. His turban stretching almost 645 meters, weighing 100 pounds takes almost six hours to be tied on his head. People around his home claim that he is often seen wearing large turbans and roaming around on bicycle.

India holds the record of larged delicacy every made. A Tapeswaram based sweet firm named Bhaktanjaneya Suruchi Firms has made a laddu weighing 29,465 kg. This record was achieved in September 2016, by PVVS Mallikharjuna Rao of Tapeswaram, Andhra Pradesh, India. The laddu is known to be offered to a deity in the area. The laddu is made up of refined sugar, ghee, almonds, cashew nuts, refined oil, cardamom, and water.

Most time spent without cutting Nails

Shridhar Chillal grown his nails for 66 years and made his country proud by earning the Guinness World Record title to his name. The 82-year-old has had his left-hand nails which were uncut for over 66 years and grown to a length of 9 metres.

The Guinness World record for having the longest moustache is held by an Indian, Mr. Ram Singh Chauhan. The jaipur man has been toiling hard and has grown the moustaches for 32 years and it is 14 feet long.

A women holding dual record for being the shortest woman and shortest teenager alive is Ms. Jyoti Ange. She measures only 61.95 centimetres or 2 feet.

The record for the most expensive wedding in the world is held by steel tycoon Mr. Lakshmi Mittal’s daughter, Vanisha’s wedding. The total amount spent was approximately USD 60 million in 2004 which is way more than the wedding expenses of Britain Royals.

Most Earth Worms eaten per minute

John Peter of India has a weird diet which comprises earthworms, dragonflies, dal for dinner and a midday snack of lizards. With his daily eating habits he manage to set a world record of eating the most earthworms in a minute.

Indians have done amazing feats to win recognition ans one such attempt was made by 60 Indian chefs who worked with pole length ladles to cook biryani using 1200 kgs of rice to set a guiness world record.

Longest hair on a Teenager

Nilanshi Patel, a 16-year-old teenager from Gujarat, continues to hold the Guinness record for the longest hair on a teenager. Her hair length of 5 ft 7 inches takes her half an hour to dry and an hour to comb the locks.

20 Hollywood movies you must watch before you die