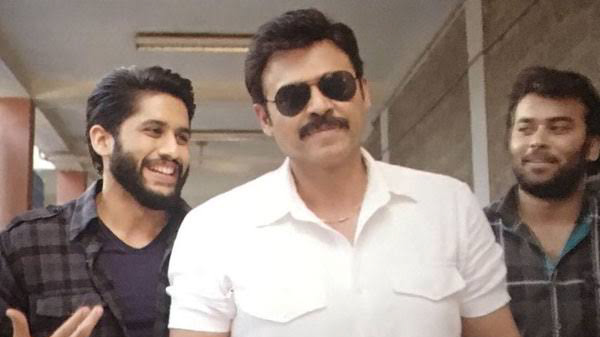 It will always be amazing and hilarious when your favourite actor or actress pops up out of nowhere, especially in the movie you are not expecting them to be. ‘Cameo’ is a popular phenomenon in American TV shows and movies. From past couple of decades Indian movies are also following this trend every now and then.

Although most of the cameos last for a minute or two, they still manage to bring a lot of hype to the film. Tollywood also had some of the most funniest and amazing cameos from top deck celebrities. Out of friendship and respect for the fellow actors or directors of the film, many celebrities will agree to appear in cameo roles.

Here is a list of Top 10 Celibrity Cameos in Telugu Movies of recent times.

Chiranjeevi appeared on big screen in Bruce Lee after a 6 year long break and fans were beyond thrilled to see their idol. This movie starring Ram Charan didn’t do well at the box office but mega fans couldn’t ask for a better cameo of the Supreme star. The attitude of Mega Star was showcased so perfectly in the scene making it evident that Boss’s style is unbeatable. The powerful background music, slow motion fight scene and the horse just made the cameo historic.

Premam movie starring Naga Chaitanya has Victory Venkatesh’s cameo. This has reference from his past movie Gharshana that added a lot of spice to the scene. Venkatesh acts as uncle of Chay who supports his nephew in a meeting with the principal. The dialogues connected very well to the audience as Venkatesh and Chaitanya are uncle-nephew in real life too. This duo was much loved and they went on to act in a multi starrer-Venky Mama.

Naga Chaitanya made a cameo appearance in Keerthi Suresh’s Mahanati. Though there were many cameos in the movie Naga Chaitanya’s was special as he played the role of Veteran actor Akkineni Nageshwar Rao who was his grand father. Chay very much resembled his grand father in his early career days. Audience were elated to watch him recreate the iconic scenes from several hit films of Nageshwar Rao.

Ram Charan in Khaidhi No.150

Khaidi No. 150(2017) marks the return of Chiranjeevi to films after a decade. Obviously it was the much awaited movie of that year. Mega Power Star Ram Charan not only produced this movie but also did a cameo in it along with music director Devi Sri Prasad. The song they appeared in was a super hit and it was a double treat for fans to watch the tollywood’s most celebrated father-son duo tap their feet to mass song composed by DSP.

No matter how many films Naga Chaithanya and Samantha act together, we can never get enough of them. Samantha’s movie “Oh Baby” in which she acted and produced made her place permanent as lady Super Star. The movie is loaded with cuteness of Samantha but the cutest of all the scenes happens to be the surprise cameo of her husband, Mr. Naga Chaithanya. The scene which is climax of the film never fails to put a smile on face of the viewers.

This Akkineni hero is a celebrity even before his debut into Telugu movies. Akhil, who is a trained cricket player gained lot of popularity through celebrity cricket league. Both Telugu industry and audience were waiting for his acting debut. Amidst all these, came his cameo in Manam movie. With this amazing cameo, both audience and Telugu film industry were convinced that Akhil will be star in coming years. The Cameo was so good that expectations on his debut movie sky rocketed.

Rajamouli, the star director of Telugu film industry has done couple of cameos in his own movies ( Sye & Bahubali) which didn’t grabbed the attention of audience. However, his cameo in Majnu stood out and received appreciation from audience. Rajamouli plays himself in the movie. Actor Nani plays the role of assistant director to Rajamouli in the movie. The conversations between them and several references of Bahubali will make the scenes hilarious to watch.

Tollywood star actress Anushka shetty plays a Cameo along with Adivi Sesh in Oopiri movie. Though she only plays a Cameo role, her scene in the movie was important to conclude one of the plot lines. Anushka, who shares a good bonding with Nagarjuna readily agreed for the cameo when contacted by Oopiri team.

This was a rather unexpected cameo in the movie Manmadhudu 2. There was no prior intimation that Samantha, the daughter-in-law of Nagarjuna had a Cameo in his movie. Though her screen time was very less, she manages to entertain the audience with her goofy acting.

Senior actor Venkatesh Daggubati did a Cameo in Pawan kalyan’s Agnyaathavaasi movie. Many of us are unaware of this cameo as they were added later when the movie recieved negative reviews from the audience. By the time the Cameo was added, fans have already watched the movie and rest of the audience avoided due to the disaster talk on the movie.

This is how Nibba Nibbi memes emerged on Internet.