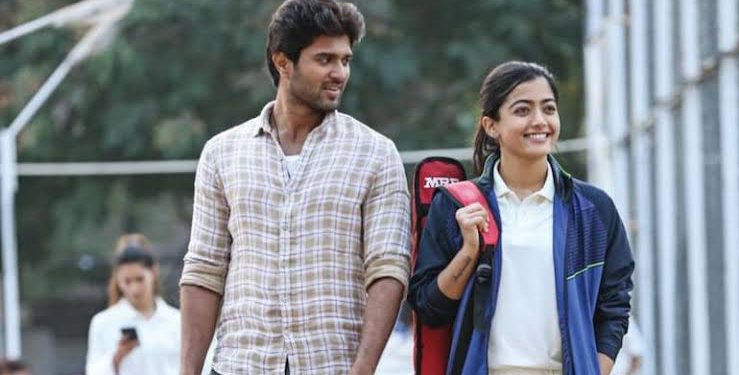 You maybe single, having no one to celebrate Valentine’s Day with or you maybe in a relationship but have no plans to celebrate, either way watching a romantic movie is the best option. We have got you list of 14 love stories to set the Valentine’s Day mood. Here goes the list in no particular order.

This movie has to be on top of the list. Nagarjuna plays Prakash who is diagnosed with cancer and Girija plays Geethanjali who is also ill. Although in first few meeting they hate on each other, they gradually fall in love. The movie is a pure classic that shouldn’t be missed.

One of the most beautiful films ever made. Naga Chaithanya plays Karthik who is a budding director and Samantha plays Jessie who stays in the upper portion of Karthik’s house. They fall in love but it is a bit complicated as both of them belong to different religions. Due to some situations they drift apart. Whether they finally meet or not is the remaining story of the film.

“Love makes life beautiful” is the tagline. The protagonist Sidhu falls in love with Hasini(Genelia) a college student after his engagement with another woman . When Sidhu’s father (Prakash Raj) asks Sidhu how he knew that Hasini is the right one, Sidhu says that he’d bring Hasini home for 7 days. Watch this ultimate fun filled family drama if you haven’t.

Allu Arjun who plays Arya in the movie says that one sided love is much better. He doesn’t want Geetha the girl who he loves to love him back, he just wants her to feel the love he has for her, the honesty and selflessness in it. Strange but cute right? Well there are lot more cute things in the movie.

Although it’s an action film basically, we have included it here because of the chemistry between the lead pair. Prabhas plays Venkat who loves Shailu played by Trisha. How far Venkat goes to protect his girl from the antagonist is the basic plot of the movie.

Keep tissues handy because you’re gonna need a lot of them. But what’s love without pain? Sidharth plays Uday, a care-free guy and Shamili plays Sandhya a strict and orthodox girl. These opposite characters attract each other and fall in love. But their fate take a bad turn and Sandhya gets ill. How Uday makes her happy despite all of this is shown beautifully in the film.

High school sweethearts Varun and Nithya played by Nani and Samantha meet again in college just to part ways later. This on and off of their relationship continues. One of the most underrated movies of Tollywood. Movie is so relatable that it feels as if you’re watching your love story or your friend’s.

Very few films show the movie from heroine’s point of view. Godavari is one such film. Kamalni Mukherjee plays Seetha, an independent girl who goes on a trip to Bhadhrachalam. She travels in a launch where she meets Ram played by Sumanth. Their acquaintance turns into love. The scenic beauty of Godavari makes the movie more alluring.

Allu Arjun was just being himself in the movie. AA plays Bunny, a pizza delivery boy who in some unavoidable conditions have to pretend to be husband of Madhumathi played by Genelia. The first half has non-stop comedy. Bunny-Madhu fights are the highlight of the film. You could have watched this movie a hundred times but you still won’t get bored.

Bobby (Vijay devarakonda) falls in love with his neighbour Lilly (Rashmika Mandhanna). As their relationship progresses Bobby becomes more supportive of his girlfriend’s sports career. But one incident changes their lives. Bobby and Lilly break up but Lilly’s memories still haunt Bobby. Bobby sets on a bike trip discovering himself, he later learns that Lilly gave up cricket. How Bobby and Lilly overcome this trouble forms the rest of the story.

Varun Tej plays Varun, doctor in USA. Varun meets Bhanumathi played by Sai Pallavi in his brother’s marriage in India. Varun can’t get Bhanu out of his head even after going back to U.S. He proposes to her but Bhanu rejects him as she doesn’t like moving to foreign after her marriage. Will Varun’s love change her mind is something you have to watch the movie and find out. The movie won several awards and I bet you too can’t get Bhanu out of your head just like Varun.

How would it be to fall in love with a celebrity? Sammohanam is the answer. Sudheer babu plays Vijay, a cartoonist allows a film unit to shoot for some days in his house and that’s where he meets Sameera played by Adithi Rao. Both of them are so different yet the same. Love blossoms as they share each other’s secrets on a starry night on the terrace. This film is simple but beautiful.

What is the right age to fall in love? It was 8 for Chanti and Anu. This movie starring Uday Kiran and Reema Sen is one of the most successful movies of their careers. Chanti and Anu are childhood friends. Anu moves to another country and Chanti too leaves that city. Anu returns to India to find where Chanti is and when she does, she decides to keep this a secret for few days. Did Chanti finally know his Anu, is the remaining story.

Gautham(Nani) accidentally bumps into Nithya (Nithya Menon). They both bond over common emotion- their lovers ditching them. From then they become best friends. Gautam starts liking Nithya but learns that she’s already engaged. A whole lot of confusion and fun drama later they finally reunite. The movie is perfect to create a lighter mood.

Indian Fruits and Vegtables with High Water Content above 90%

Indian Fruits and Vegtables with High Water Content above 90%