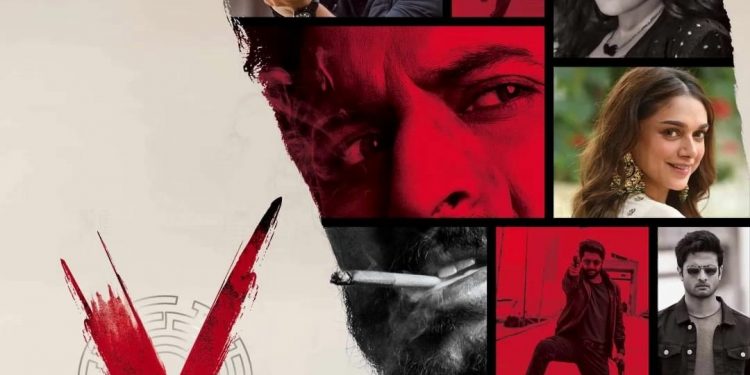 Tollywood’s first big release post pandemic outbreak is rather disappointing. You heard it right ! The multi-starrer starts well and keeps you interested throughout only to end up as a mere routine mediocre movie. Here is the detailed Review of the movie.

DCP Aditya (Sudheer) is a well-decorated super cop known for his achievements, looks and even for his six pack (yes, they mentioned this in the movie). Sudheer’s entry and his shirtless fight scenes will be a treat to his fans and movie audience in first few minutes of the movie. Then arrives an unknown man (Nani) following a drunk cop to his house only to torture and kill him. The unknown murderer who is believed to be a psychopath by the way he commits the murder, gains all attention of media and people. The Psychopath challenges DCP to catch him before he kills another 4 people.

Entry scenes of the cast

The Murderer whose name starts with V leaves enough clues and messages throughout the movie for the DCP to catch him. Meanwhile, Aditya seeks the help of his newly met girl friend Apoorva (Nivetha), an aspiring upcoming crime novelist to catch the murderer. The rest of the story will be a routine cat – mouse chase, outsmarting each other several times. Will the killer murders the rest 4 people before he gets caught ? Is there a motive for the mass murders ? The rest of the movie is based on these two points.

US CDC informs states to get ready to distribute COVID-19 vaccine.

Facebook limits message forwards by up to 5 people in Messenger.

Facebook limits message forwards by up to 5 people in Messenger.