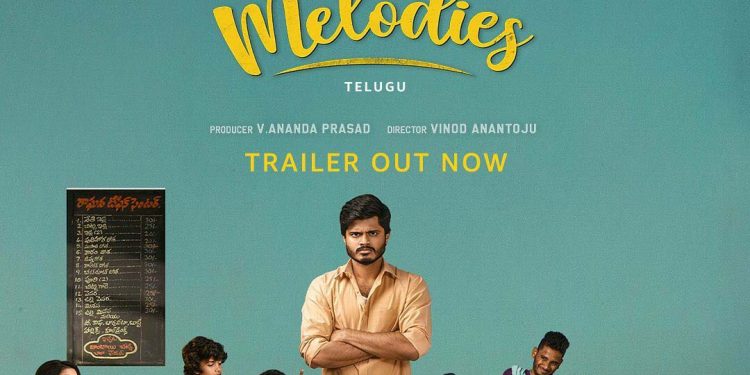 Anand Deverakonda who had an average debut last year with Dorasani is wating to check his luck this weekend with his second movie ‘Middle class Melodies’. The movie which also stars Varsha Bollamma is directed by debutant Vinod Anantoju.

Raghava (Anand Deverakonda), a middle class boy who learns the recipe of Bombay chutney from his mother, dreams of opening his own hotel in the nearby town Guntur after his schooling. Raghava and his relative sandhya (Varsha Bollamma) who goes to same school develops liking towards each other. After the final exam of 12 th grade both of them tries to meet outside Sandhya’s house. Raghava hugs Sandhya who was hesitating to confess her love for him just to get caught by her father. However Sandhya’s father didn’t know who hugged her. Raghava who was guilt struck goes to his hometown and both of them stop communicating.

Raghava plans to open a hotel in Guntur and starts search for a space in Guntur. Sandhya’s father who gets aware of this, offers Raghava a commercial space owned by him which was located in a remote colony in Guntur. Though Raghava doesn’t likes the space initially he takes it for Sandhya and starts the Hotel after lot of drama back home. Raghava plans on asking sandhya’s hand once the hotel gets in track. The rest of the story is whether Raghava’s Hotel survives the competition in Guntur and will he manage to marry Sandhya, whose father was already looking matches for her.

Though it is not an amazing story for a debutant director to work on, the director managed to work on small details of the movie perfectly. The entire cast will be seen talking in Guntur dialect perfectly leaving Anand Deverakonda and Varsha Bollamma who struggled a bit with the accent. Though Anand and Varsha gave a decent performance, the show stealer was Raghava’s dad character played by Goparaju Ramana. The movie stays true to its soul in every small aspect and detail. However, there are no worth remembering dialogues, moments or scenes in the movie.

Though the movie has completely new faces, all of them managed to perform very well. Tharun Bhacker’s cameo in the movie felt unnecessary. Overall the movie is a good one time watch. It leaves you with a pleasant experience if you lower your expectations before watching it. Guntur natives might enjoy the movie a bit more than others as they will find many things relative in the movie.

Sanchaita Gajapathi Raju : Is her claim for Gajapati family legacy is ethical ?

All you need to know about GHMC elections

All you need to know about GHMC elections