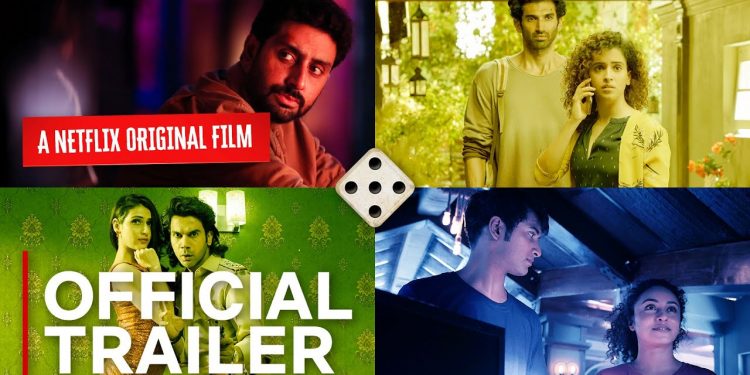 Due to the ongoing Covid-19 pandemic, Hindi film industry has taken a huge blow like rest of movie industries in India, missing out on holiday seasons, Dussehra and Diwali festivity. Thankfully its not all bad news when it comes to movies, that’s where OTT’s like Netflix, Amazon Prime, Hotstar etc come to the rescue. Although we Hindi people love watching movies in a cinema hall, it’s neither safe nor a possible option right now. With OTT platforms like Netflix and Prime Video we can watch wide range of movies, Tv series and much more at home, comfortably with our families in different languages.

Bhuj : The pride of India

Plot : Set during the Indo-Pakistani War of 1971, the movie is about the life of IAF Squadron Leader Vijay Karnik, the then in-charge of the Bhuj airport who manged to reconstruct the IAF airbase with the help of his team and 300 women from the local village Madhapar.

Plot : Based on real events of financial market that took place between 1990 and 2000 involving Harshad Mehta and his financial crimes using the loopholes in India Banking system in the 90s.

Plot : Balram Halwai, a cunning and ambitious young man jockeys his way into becoming a driver for Ashok and Pinky, who have just returned from Americ and he likes both of them. However after a one night of betrayal, he realizes the corrupt lengths they will go to trap him and save themselves. On the verge of losing everything, Balram rebels against the unequal system to rise up and become a new kind of master.

Plot : After a public spat with a Bollywood movie star, a disgraced director retaliates the insult by kidnapping the actor’s daughter, filming the search for her in real time.

Plot : The social issue drama film revolves around the lives of three women from the same family, belonging to different generations.

Plot : After being insulted by a rich businessman in Goa, pandit Jai Kishen teaches him a lesson by getting his daughter married to Raju, a railway station coolie posing as a millionaire.

Plot : A Hindu women falls in love with an orphaned Muslim man after escaping from an arranged marriage.

Plot : At an refugee camp in Afghanistan, an ex-army doctor seeks to bring joy to children by playing cricket and soon realizes that the stakes go beyond the sport.

Plot : A PT Teacher from a semi government funded school never bothers teach children. When circumstances put everything he cares for at stake, including the women he loves, the PT teacher is forced to do what he’s never done, TEACH.

Plot : From a resurfaced sex tape to a rogue suitcase full of money, 4 different stories overlap at the whims of fate, chance and one eccentric criminal.

Plot : The film deals with a ghost who lived a transgender life and seeking vengeance from the people responsible for her death by haunting an innocent family.

Foods that should not be kept in the Fridge

Foods that should not be kept in the Fridge