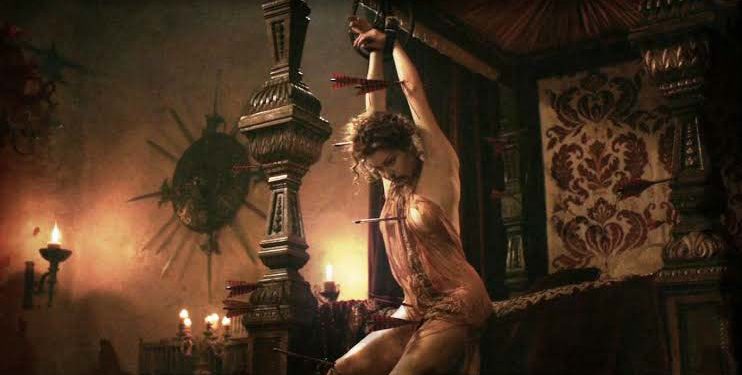 The most paused moment in Game of Thrones is the one that shouldn’t be in it. There was a scene in the last season where the army alliance celebrate their win against white walkers. In that scene we can clearly see a Starbucks coffee cup placed in front of Emilia Clarke. It’s not clear whether this was a mistake or some deliberate attempt to get people riled up and talking about the show. Soon after the episode aired People started to pause the scene to notice the famous Starbucks coffee cup.

You wouldn’t have expected this scene to happen untill it happened. The two most important characters of the story who are no where related to each other ends up together in the final seasons. This is the first time Daenerys gets intimate with a man out of love. Her first with Khal Drogo was forced and she only shared a physical relationship with Daario. Though the scene was so beautiful made, it gets a bit awkward as we come to know that Daenerys is John snow’s aunt and are of same blood line.

Viserys, the elder brother of Daenerys threatens Khal Drogo to kill his wife and their unborn child if he was not made the king. Khal Drogo grants his wish by dumping a hot cauldron of molten gold on his head. This was one of the most disturbing scenes in the the series.

There are a hell lot of sex scenes in Game of Thrones, but there are very few scenes that aren’t about titillation, shock value, or a power struggle. “The cave” scene from Season 3, Episode 5, “Kissed by Fire” is one such scene which us entirely out of love. This scene got very popular for two reasons. One being it was first time for John Snow and he don’t know how to do it. The other being both actors in this scene got married in real life later.

Khal Drogo’s and Daenerys Targaryen’s sex scenes were forced, brutal and wild. Infact Khal rapes her in thier first meeting. However, both of them develops liking towards each other. The couple has many intimate scenes in first season most of them being wild and objectionable for TV audiences.

When audiences first meet Daenerys Targaryen, she’s a far cry from the queen she will eventually become. As a meek young bride on her way to meet her unfamiliar husband, Khal Drogo, Daenerys doesn’t seem particularly imposing, especially when compared to her vicious and ruthless brother, Viserys. As one of the few remaining Targaryens, Daenerys is a valuable asset. However, as she assimilates into Khal Drogo’s Dothraki tribe, she finds herself much more powerful than Viserys. After she and Drogo fall in love and she becomes pregnant with his child, it seems like the couple could conquer the world together.

Game of Thrones is packed full of unbelievably brutal moments. The most brutal scene of the series is the infamous Red Wedding. Walder Frey accepts Robb and Talisa relationship and invites the Starks for the wedding. He then plots and kills the pregnant Talisa, Robb stark and his mother Caitlyn.

Joffrey is a sadist and he gets pleasure from torturing helpless and submissive people. In the final moments of season 3 “The Climb,” Ros’ lifeless body hangs from a bed pierced by several arrows. Ros initially comes to his room to pleasure him and Joffrey does this to her.

Cersei prepares for her Walk of atonement after confessing that she has adulterated with her cousin Lancel Lannister. Cersei will be stripped naked and will be pressured to walk around their city by the church officials. The scene will be so powerful and real that you can literally feel the pain of cersei Lannister at that moment.

Throughout the series, all the characters will take reference of white walkers many times, especially the John Snow and co who are guarding the wall. White Walkers and their undead army spend the entire show beyond the wall heading towards Westeros to eradicate all other life. This is the first time people will have a good glimpse on the ‘Night King’ who is considered as the king of white walkers ot the ‘Undead army’

10 Most paused Tamil movie scenes of all Time