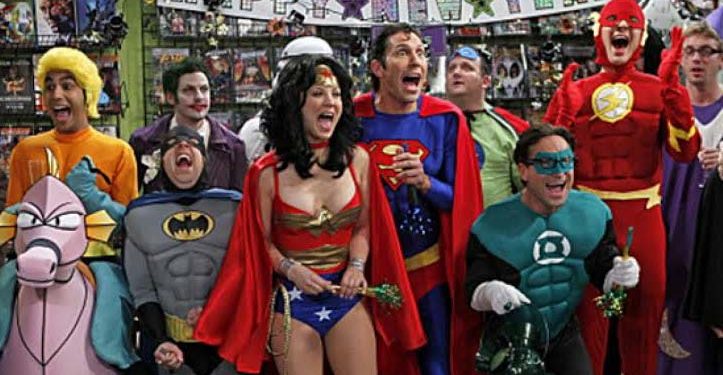 One of the most rewarding aspects of watching TV series and Netflix originals on Mobile apps like YouTube and Netflix is that you can pause the video anywhere you want. Your most favourite scene in the TV show might disappear in a glimpse on Television. However, we can watch later when the TV show streams in Netflix and other OTT pltforms. We can even select the moments in the show which we love the most and pause them and play over and over again.

It could be an emotional scene, a seductive scene, a blooper, a cameo scene of your favourite actor or any iconic scene in the movie. However, cameos are the most paused scenes in most TV dramas, especially in Sit-Coms like Big Bang Theory.

For more than 12 years, Big Bang Theory has entertained its fans. Sheldon, Leonard, Howard, Raj, Amy, Bernadette and Penny brought smiles to our faces with their nerdy banter, Friendship, Relationships, love for one another, and of course, the Bazingas. As the show ended after a 12 year long run, Here is the list of top 20 most paused moments in Big Bang theory which includes the Celebrity Cameos, Some Crazy Halloween outfit moments and the most bizzare kisses and romantic encounters.

Amy explains a situation where there was no Leonard in their lives and Penny still lives across the room to Sheldon. In Amy’s Imagination Penny tries to seduce Sheldon in the Laundry room and Sheldon denies her saying that he’s been saving himself for a cute Neurobiologist. The scene ends when Penny was about to Kiss Sheldon forcefully.

Takei appears in Howard’s fantasy dream to offer him relationship advice about Bernadette and he will be accompanied by Katee Sackhoff and Bernadette in Howard’s dream. Takei literally plays himself, a lovable and eccentric man wearing his famous Star Trek uniform. He gives relationship advice to Howard on Bernadette. The Battlestar Galactica’s Katee Sackhoff was also there in this episode alongside Howard on his bed.

How can a geek show exist without Cameos from the Star Wars cast. Carrie Fisher, who played Princess Leia has a hilarious cameo that includes a heavy baseball bat. If that wasn’t enough, she opens the door with a baseball bat in her hand when when Sheldon and James Earl Jones, the man who played Darth Vader in Star Wars show up at her house after playing ding-dong ditch with doorbells in the neighborhood.

This was the most unexpected kissing scene in Big Bang Theory. Sheldon and Leonard’s Mom are very similar in many ways. Though both of them don’t find social interactions appealing, they both find each other’s company very sensible. There’s a scene where Penny gets Beverly drunk and they both arrives at Sheldon’s Apartment. Sheldon who gets up from his sleep comes to the hall area, only to get kissed by Leonard’s Mom. The next day morning she apologizes to Sheldon and both of them blame the alcohol for the bizzare kiss they exchanged.

Sheldon and Penny making out in Leonard’s Dream

This is another Bizarre dream sequence in the Big Bang Theory. In Leonard’s dream, Penny and Sheldon gets sexual kissing each other. This was a complete unforeseen scene, as there was no hint of intimacy between Sheldon and Penny in the entire show.

Every Big Bang Theory fan is aware that Penny wanted to become an Actress. Inspite of trying many times she never landed up in a movie. However she lands in a small movie role, where she gets attacked by a Psychotic Genetically engineered Ape when taking shower.

Sheldon imagines Leonard making out in his room

Sheldon and Leonard have been roommates for a long time, years before the pilot episode of Big Bang Theory. When Penny and Leonard gets engaged, they tell him that he needs to find a way to eventually move out. In a scene where Sheldon stays in other flat, he imagines Leonard and Penny making out in his room in a weirdest possible way.

Sheldon and Amy dressed as Howard and Bernadette

Throughout the series, there were a lot of great moments involving the Halloween costumes. However there’s one episode in whcih Howard wears a perfect Sheldon Cooper costume to the university and ridicules Sheldon all day. But the real treat came when Sheldon gets the revenge with the help of Amy by showing up to the party dressed as Howard and Bernadette.

Katee Sackhoff has more more than one Cameo scenes in Big Bang Theory. Howard imagines Katee Sackhoff in her Bath Tub when he’s unsure about his relationship with Bernadette. Katee gives him some honest advises by sharing a champagne with him.

Leonard takes a vow not to get intimate with penny due to some unavailable reasons. However, Penny tries to seduce Leonard to get him to bed. Though Leonard holds himself for most of the time, he looses control when she strips her clothes.

There are many references of Star Trek in Big Bang Theory. Sheldon has been a biggest of Star Trek since his childhood. Seeing the cast dressed up in full cosplay as Star Trek characters is something worth pausing.

When Howard joins the gang at a soup kitchen to serve meals to the homeless, he gets stuck in the dish pit and starts washing the dishes. However his spirits are lifted when he meets Tesla’s founder, Elon Musk doing the dishes. Both of them share a piece of pumpkin pie while Elon talks about how much he loves volunteering.

Raj kissing Howard is one of the most funniest and awkward scene in Big Bang Thoery. Raj, who was extremely drunk tries to kiss Bernadette when she tries to comfort him with positive words. Leonard quickly pulls her aside, only to get kissed by Raj. Both maintain an awkward silence which continues for a while.

This genius of our generation actually appears in a handful of episodes playing himself in Big Bang Theory. It was really entertaining to watch such a famous scientist participating in a sitcom and cracking a bunch of jokes, while still being an absolute genius.

Even super-genius like Sheldon will have physical limitations. In an episode, Sheldon decides to eschew physical interaction with the outside world and creates Shelbot with which he can see the world entirely through a screen from the comfort of his bedroom.

The episode has some amazing scenes involving the Shelbot. There is a funny scene where Shelbot is seen wearing T shirt and sitting in the passenger seat of Leonard’s car. Later as the day passes Sheldon realises that Shelbot doesn’t really help him in all situations.

The comic-book legend has the most cameos in the history of Cameos. He has a cameo in Big Bang Theory as well. When Sheldon and Penny show up at his house uninvited. Stan Lee opens the door wearing a Fantastic Four robe, and he eventually gets a restraining order against Sheldon, and that’s really all that matters about this encounter.

On the series finale, just when we thought Big Bang was done with cameos, they threw in one last one and the most amazing one. Raj ends up sitting next to a Hollywood actress, Sarah Michelle Gellar on the plane on his way to the award ceremony, and she ends up attending with him as his guest. Sheldon points out her saying ‘Is she Buffy the Vampire Slayer’ in the middle of his Award accepting speech.

Raj Kisses Bernadette in his imagination

Raj often fantasised himself with his friends girlfriends. Both Bernadette and Penny are also in the list. In a scene, Raj imagines himself kissing Bernadette when Howard asks him to take oh his wife in his absence.

One of the most iconic scenes in Big Bang Theory is when Howard dresses to office as Sheldon. Howard was very convincing in his Halloween costume cosplaying Sheldon. The most funny part in this scene is that Sheldon doesn’t realises that Howard was dressed as him until he was told by Leonard and Raj.

This is one of most iconic Halloween episode in Big Bang Theory. The entire cast dresses as Justice League of DC comics. Penny looks hot (mentioned by Leonard) and beafy (mentioned by Sheldon). Raj’s Funny Aquaman costume, Leonard’s Green lantern and Sheldon’s Flash costume adds to up to the eye feast.