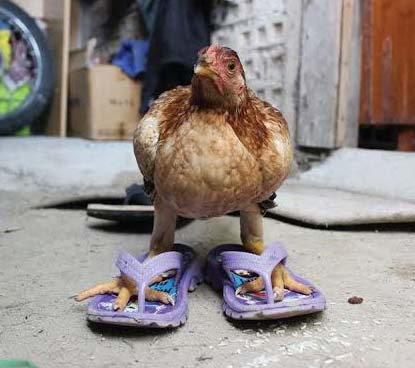 Chicken ! Chicken ! Chicken ! Probably the most used word after Jesus in the US. Every Non vegetarian loves chicken and wants them in every meal they have. With the increase in consumption of chicken, poultry farming increased in leaps and bounds. Which means we can find chickens in any corner of the world.

Apart from the food conversation we are having, Chickens can be extremely funny as animals. Their behaviours are hilarious and their movements are full of extreme silliness and randomness. They run around in a confused way and they make this unique ‘bwok’ sound that can make you crack up. Here are a list of Chicken memes that are funny and amazing.

Chickens are always nervous. Especially the poultry chickens. Why won’t they be ? How can some one shit infront of others ? Poultry farms are very sick !

Chickens never betray you. You betray them. Infact you sausage them.

Chickens are loyal. They come to their human no matter how he treats them.

In an alternate Universe, Torchic evolves as Chickenzard and the rest will be history.

Chickens don’t give a *uck. If you Piss them off, they might show their anger very vocally

Few Chickens are great at counting. They count their eggs regularly.

It’s hard to get rid of a bad Habit. Be it for humans or the chickens.

And yet again chickens don’t give a *uck.

Chickens like socializing and boozing especially when people around piss them off.

Chickens have been looking Peter Griffin for a while now.

Forget the cheetah, Humans can’t even beat a chicken in a running race.

Whether you’re a Chicken or Human, Drink limited and use protection

The KFC old man is responsible for billions of deaths of Chickens and this one there is not giving a *uck about the murderer and his workers.

Win or Loose, the fight should remain. This was the last chicken standing and probably died then.

You can’t trick the chickens. They know the old man Harland Sandler, the Hitler of chickens.

Organic chickens are big ! And this one is not photoshopped.

Vegan Neighborhood is a Chicken Paradise. All you got to do is Relax and Booze !

So you thought chickens don’t have sun burns ?

This is how chicken is killed for a Shredded chicken recipe, by pulling out the breaks of their rides completely and exposing it to heavy accident.

Oh No ! Our of captions here !

Marilyn Monroe knew she was hot and this bird right here know it tastes delicious.

Chickens are the most popular among the animals as well. Why not ? Every Menu only have them over others

Boredom struck ? This is where Chickens come to the rescue.

While few Chickens bully other chickens, another few will bully humans. You didn’t believe ? Then you better watch ‘Young Sheldon’