Story of Ananthalwar : The Devotee who wounded Lord Venkateshwara

by Editor TTNow
in Bhakti
0 0 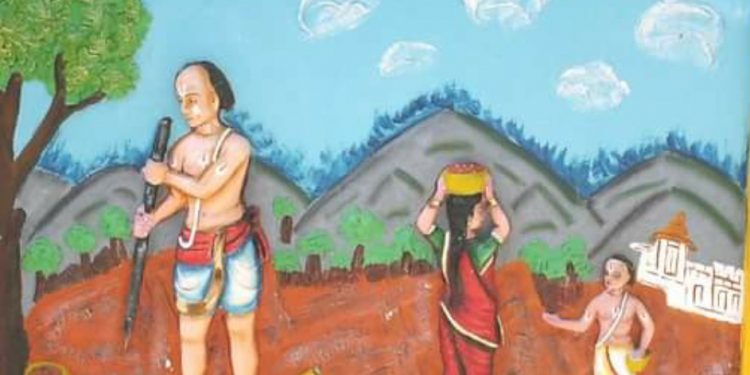 Tirumala Temple is one of the most visited Holy places in India. Millions of devotees come to Tirumala for the darshanam of Lord Venkateshwara. However, around 1000 years ago, there was a devotee of Lord Venkateshwara who injured his beloved deity and made him bleed. Because of that heavily bleeding wound, green camphor is applied to the Lord’s chin to this day during the rituals.

The devotee also tied Padmavati Ammavaru to a champak tree with creepers and denied to free her untill her husband Lord Venkateshwara arrives. Both of these unimaginable and horrifying acts were not even performed by the Rakshasa clan. However, inspite of all his acts, the man is often referred as Lord Venkateshwara’s main devotee.

Story of Ananthalwar and his Crowbar

Ananthalwar is a disciple of Ramanuja who entrusted his disciple to serve Lord Venkateswara and take care of him on the Tirumala Hill. Like many Hindu deities, Lord Venkateswara was also a lover of flowers and garlands. Ananthalwar used to decorate Lord’s idol with different flowers. Every morning, he gathered various flowers, prepared garlands out of them, decked the lord with them and admired his beloved deity with chants and songs

This practice continued for a few days untill Ananthalwar came up with a idea of creating a flower garden for Lord Venkateshwara. After completing his daily responsibilities by afternoon, he used to start working on the the flower garden. He thought that This was a special task relating only to his God and himself! So, apart from his pregnant wife, he never let anyone help him.

Ananthalwar started the work by digging a lake. He chose a place to the south of the Tirumala temple. His duty was to dig the mud and make a huge hole. His wife’s duty was to throw the mud far away. As she was pregnant, the work became a hectic task for her. But he was unmindful of her suffering as he was always lost in the thought of Garden. The wife had no complaint against her husband though as it was a spiritual act.

Moved by his devotees efforts, God wanted to help them. So he went to Ananthalwar as a 12 year old boy and sought work. However, Ananthalwar refused his work and drove him away. His sincerity and love pleased Lord Venkateswara all the more. So he came to his devotee everyday and asked him repeatedly to employ him and all the times Ananthalwar bluntly refused his offer.

Unable to bear the physical suffering of his devotee’s pregnant wife, God requests his wife and she gets pleased by him and employs him for some help. On one occasion when this came to the notice of Ananthalwar, the latter gets furious and hits the lad with a crowbar, which makes him bleed badly.

Later that evening Ananthalwar visited the god in Tirumala, he finds that the Lord was bleeding from the chin. He at once realises that it was the Lord himself who had helped his wife and regretted his behavior. He then applies raw camphor for the wound and weeps for his mistake.

Lord Venkateswara was impressed with Ananthalwar’s devotion, forgives him and tells him that raw camphor will be displayed before him forever as a mark of Ananhtalwar’s devotion towards him.

Ananthalwar eventually completes the garden work and take cares of every bud, every leaf, and every blossom in thr garden. He knew every plant in his garden. The flower garden becomes favourite resort to Lord Sri Venkateswara and his wife Padmavathi. Every night, the couple spent their time together there, without the knowledge of their devotee.

One night during their visit, Lord Venkateswara plucked a few flowers and offered them to his wife. The next morning, Ananthalwar realises that somebody was visiting the garden at night time and plucking flowers which are meant for God. From that day he started looking for the humans secretly during nights. One night as he was looking out, he saw a couple entering his garden. He ran towards them. He caught hold of them both in his hands. The couple tried to free themselves from his hands but was not successful.

After some time, the husband managed to escape. Ananthalwar wondered how he could leave his beautiful wife behind and felt he would definitely come back for his wife. So he takes Padmavati Ammabaru to a nearby champak tree and tied her to it with creepers.

The lady requests him in many ways, but he was not at all pleased and paid a deaf ear towards her. The next morning, when the priests opened the door of the temple. They were dumbfounded as Goddess Lakshmi who is always seated on Lord Venkateswara Vakshastala was missing. Then they hear a voice which says that she was imprisoned in the flower garden of Sri Ananthalwar. The Brahmins unable to believe their ears, hastened to the garden and finds her statue tied to a tree. Ananthalwar again realises his mistake and weeps with a heavy heart.

Along with the Brahmins, he carries Lakshmi statue in a flower basket and takes her to the Lord’s presence. On seeing this scene, God calls Ananthalwar as ‘Mama’. “You brought your daughter to me in a basket. Henceforth you are my mama”. Goddess Lakshmi occupies her original place on the Vakshastala of Lord Venkateswara.