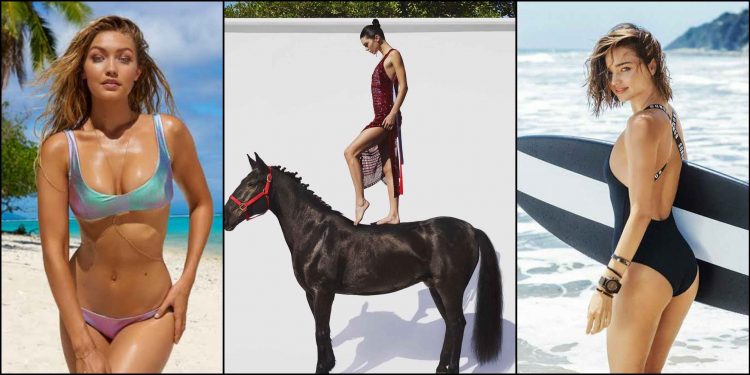 These days, being beautiful isn’t just about winning the DNA lottery or getting groomed with celebrity stylists. With the increase in Social Media users, people started admiring real beautiful women by following them in huge numbers.

Many beautiful women have conquered social media and dominating newsfeeds for a decade. With millions of fans following in social media accounts every post they update will go viral within seconds.

Also Read : List of most beautiful actress in the world

They might probably have a massive make-up and stylist team at play, plus an army of social media, PR, and branding consultants. But despite all these, they deserve our applause for giving us a view of their picture-perfect looks.

Here is the list of the most beautiful women in the world for 2021. The list includes the likes of both actresses and models.

Most Beautiful women in the world

Gal Gadot is an Israeli actress, singer, martial artist, and model. She was born to a Jewish family. Gal began modeling in the late 2000s and made her film debut in the Fast and Furious franchise as Gisele which was her first shot to international fame. She appeared in short roles in few other Hollywood movies.

Gal is a motorcycle enthusiast in real life and owns a black 2006 Ducati Monster-S2R. She has been married to an Israeli businessman Yaron Versano for the past 13 years. The couple has two daughters.

Amber Heard is an American-born actress and model. Born and raised in Texas. State, she made her film debut in a minor supporting role in the sports drama Friday Night Lights (2004), followed by a series of other small roles in television and films. She acted in Hit movies like Never back down, Rum diary, Informers, Zombieland, etc which got her international fame.

Rosie Huntington-Whiteley is best known for her work as Victoria’s Secrets lingerie model and as a Hollywood movie actress. She appeared in many Victoria’s Secret Fashion shows from 2006 through 2010 and became a Victoria’s Secret Angel in November 2009. Rosie has been the cover girl for international fashion magazines including Vogue, GQ, Elle, Harper’s Bazaar among others.

Rosie made her film debut as Carly Spencer, Sam Witwicky’s new love interest in the third installment of the Transformers series which went on to become a huge hit. She followed up her debut with another role in Mad Max : Fury Road which was one of the blockbusters in 2015.

Emma Watson is the first love for millions of people born in the ’90s. The actress rose to global fame at the age of 12 with her performance in the Harry Potter Series. Her iconic performance as Hermione for 10 long years in the series has gained her millions of fans across the globe. The UK-born star is a graduate, social activist, author, and much more.

Post her succes with Harry Potter films, Emma became a part time model and made appearances for many fashion labels. Her recent blockbuster ‘Beauty and the Beast’ grossed over 1 billion dollars at Box office

But this godlike perfection of a person and her impeccable acting skills are not just limited to this franchise. She is also accredited to have played celebrated characters like Belle from Beauty and the Beast, Meg March from the 2019 movie Little Women, and Sam from The Perks of Being a Wallflower.

Gigi Hadid began her modeling career when she was just 2 years old. She was discovered by Paul Marciano, of Guess, she started with Baby Guess, after which she stopped the show business so she could concentrate in school, she eventually got back, continued working with them.

She made her acting debut in 2011 in a short movie called Virgin Eyes as Andrea. Gigi is best known for being a Sports illustrated model and for her recurring role on The Real Housewives of Beverly’s show.

Miranda began her modeling career in the fashion industry when she was just 13, winning the 1997 Dolly magazine model search competition. Since 2008, Kerr has consistently ranked on the Forbes list of highest-paid models in the world.

Kendall Nicole Jenner was born in Los Angles, California. Kendall is an American socialite, television personality, and top model. She is featured on the E! reality TV show, Keeping Up with Kardashians show, along with the rest of her family. Kendall is one of the world’s top Models and has a massive fan following on social media.

The long leg beauty is known for crazy and hot photoshoots. Kendall also has her dressing line and cosmetics brand partnering with her sister Kylie.

Isabella Khair Hadid, usually called Bella is an American model, signed to IMG Models in 2014. In December 2016, the modeling Industry voted her “Model of the Year” for Model.com’s Model of the Year 2016 Awards.

Hadid began modeling from her teenage years. she has made to cover pages of almost all popular fashion magazines on the planet. Recently, Bella was named as the most beautiful woman on the earth with scientific body and face analysis.

Irina Shayk is one of the top models on the planet. The sexiest model of our generation was born in the USSR in 1986. She is well known for her appearances in the Sports Illustrated Swimsuit Issue between the years 2007 and 2014 and was the cover model 2011 issue. Shayk made her acting debut as Megara alongside Dwayne ‘Rock’ Johnson in Hercules.

Ana de Armas was born in Cuba in 1988. At the tender age of 14, she began her studies at the National Theatre School of Havana, where she graduated after four years. In her teenage, she made her first film, Una rosa de Francia and a few titles came after until she moved to Spain, where she continued her film career and started on Television. In 2014 she moved to Los Angeles for better career opportunities. She has appeared in films such as War Dogs, Hands of Stone, Knock Knock, and Blade Runner 2049.

Ana is now playing the female lead opposite Daniel Craig in No Time to Die, a James bond movie. The movie was set to release in 2020 but was postponed indefinitely due to a pandemic outbreak.