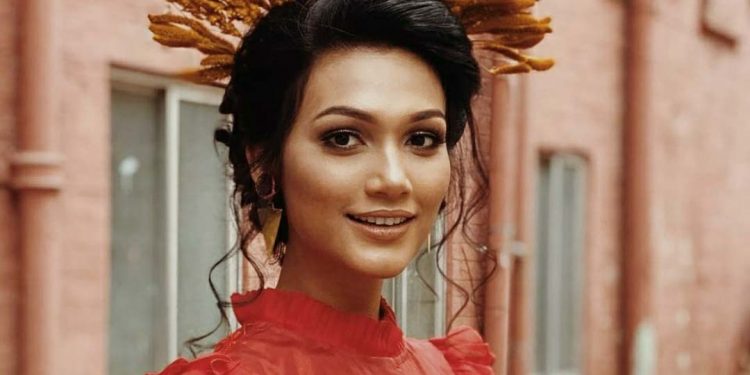 Mehazabien Chowdhury is a model and TV actress from Bangladesh. Mehazabien began her acting career after winning Lux Channel I Superstar, a Bangladeshi beauty pageant in 2009, and rose to national prominence for her acting ability in TV Dramas and Ad commercials.

Puja Cherry Roy is Film Actress and Model from Bangladesh. She debuted as a child  actress in the movie Bhalobashar Rong and later appeared in the movie PoraMon 2 as the female protagonist. She is also a familiar name in advertising industry.

Airin Sultana is a Bangladeshi film actress. She rose to recognition after winning the Best Smile Award in the Pantene You Got The Look 2008 contest. She has walked on numerous ramps both in Bangladesh and abroad. She began her film career with the film Bhalobasha Zindabad, opposite Arifin Shuvoo  which did quite well in the Bangladesh box office

Eamin Haque Bobby, better known as Bobby in film industry, is a Bangladeshi film actress and film producer. She made her acting debut in Khoj: The Search.  Dehorokkhi movie, which was released in 2013 helped Bobby to establish herself as a star in the Dhallywood film industry

Umme Ahmed Shishir, the wife of famous Bangladesh cricketer Shakib Al Hasan is a Bangladeshi model and software engineer. She and her husband are often referred as the best Bangladeshi couple. Umme has done many TV commercials including Banglalink Ad commercial with her husband.

Bidya Sinha is a Bangladeshi actress and model who worked in many Dhallywood films. She made her debut in 2008 appearing in Amar Ache Jol directed by Humayun Ahmed and there is no stopping from then. She acted many films, TV Dramas and Ad commercials.

Jaya Ahsan is a senior Bangladeshi actress and producer. She started her career as a model and later entered television industry. she currently works mostly in Bangladeshi films and Indian Bengali films. She is a four time Bangladesh National Film Award winner for her performances in the films Guerrilla, Chorabali, Zero Degre and Debi. She won many other national and international awards in her career

Nusrat Faria is an all-rounder in Bangladesh Media industry. She is a film actress, model, television presenter and radio jockey. Nusrat made her debut with Aashiqui, a remake of Tollywood’s Ishq movie and has also starred in two other Bangladeshi remakes of Tollywood films.

Tanjin Tisha is a Bangladeshi Television actress, model and presenter. She has acted in Bangladeshi television serials and dramas. She won Meril Prothom Alo Awards in Best Newcomer category for her performance in a local language drama U-turn.

Shirin Akter Shila is a young Bangladeshi model and beauty pageant titleholder who was crowned as Miss Bangladesh in 2019. Shirin is also the first women who represented a Muslim country in Miss Universe contest. Shirin is currently a third year student studying physics in Dhaka University.

Flight delivers organs in time to save 4 lives in Delhi

Flight delivers organs in time to save 4 lives in Delhi