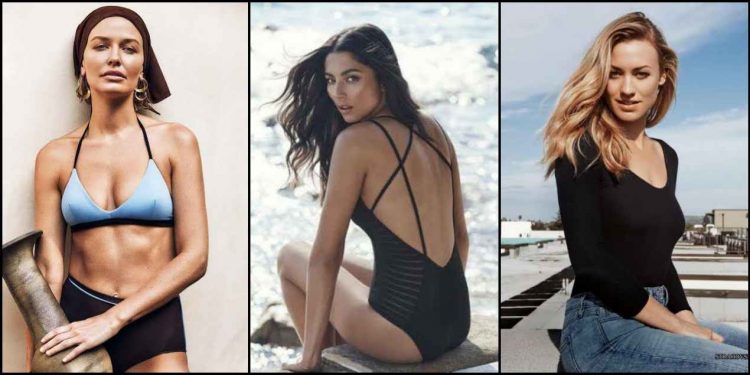 Australia has some of most beautiful and hottest women in the world. The Australian film industry has many beautiful women working in it. It almost seems like Australia has the most attractive per capita than any other country in the world. Australian women are naturally tall and athletic which gives them the edge over other country women. Here is a list of Top 10 most beautiful and Hottest Australian women and actresses who are popular both in and outside the country.

Top 10 Most Beautiful women in Australia

Jennifer Hawkins is an Australian model, television presenter known for being crowned Miss Universe Australia and as Miss Universe in the same year. She became the host of Australia’s Next Top Model show in which she debuted as a contestant earlier. She alost hosted Lovable Intimates, Mount Franklin Lightly Sparkling and Range Rover, and formerly the face of Australian department store Myer.

Yvonne Strahovski is an Australian actress best known for her roles as CIA Agent Sarah Walker in the NBC spy drama series Chuc and as Hannah McKay in the Showtime drama series and as CIA Agent Kate Morgan in the Fox event series. She is considered as one of hotest actresses in the Television industry.

Yvonne Strahovski – Ninth most beautiful and hottest women in Australia

Lara Worthington previous called as Lara Bingle is an Australian advertising model and media personality. She is known for appearing in the 2006 advertising campaign “So where the bloody hell are you?” For Australian tourism. Her own reality television series, Being Lara Bingle, premiered on Network Ten in June 2012 which opened to more than expected viewership but the show was ended due to mixed reviews from critics.

Jessica Gomes is an Australian model who appeared in the Swimsuit Issue of the American publication Sports Illustrated for 7 years from 2008 to 2015. However, she works extensively in Australia and Asia. She has been a spokesperson of many South Korean companies and other Asian companies.

Jesinta Franklin who was earlier called as Jesinta Campbell is an Australian TV host, model and beauty pageant titleholder. Franklin won Miss Universe Australia 2010 and represented Australia at Miss Universe contest in 2010 and ended as a second Runner Up. She then became a guest reporter in The Morning Show.

Isla Fisher is an Australian actress and author who began her career on Australian television. Born to Scottish parents in Oman, she moved to Australia at a very young age. After appearing in television commercials at a young age, Fisher came to prominence for her portrayal of Shannon Reed on the soap opera Home and Away garnering two Logie Award nominations. From then she played many roles in Australian Drama series.

Rachael May Taylor is both an Actress and Model. Her first leading role was in the Australian series headLand and she made the transition to Hollywood, appearing in films including Man-Thing , See No Evil, Transformers, Bottle, Cedar Boys Splinterheads etc. She has also starred as Dr. Lucy Fields on Grey’s Anatomy, as one of the Angels on the short-lived reboot Charlie’s Angels (both 2011) and is also a part of Marvel Cinematic Universe.

Emily was born on 1988 in Melbourne, Australia. Browning made her film debut in the television film The Echo of Thunder in 1998 and subsequently appeared in television shows such as High Flyers, Something in the Air and Blue Heelers. She is one of the most beautiful faces in Australian film industry. Emily Browning has recieved multiple awards in her acting career.

Margot Robbie is most familiar Australia actress in Hollywood and rest of Australia. The ‘Suicide Squad’ actress has also made to the list of Most Beautiful actress in the world.

Margot Elise Robbie was born in Australia to Scottish parents. Robbie played the character of Donna Freedman in the long-running Australian soap opera, Neighbours (1985), for which she was nominated for two Logie Awards. She set off to US to pursue Hollywood opportunities, quickly landing the role of Laura Cameron on the short-lived ABC series, Pan Am (2011) and made her big screen debut in the film, About Tinr (2013).

Robbie rose to fame co-starring alongside Leonardo in Wolf in the Wall street. After that there is no turning back. The Australian actress started as Harley Quinn in Two DC movies which made her crowd favourite.

Miranda May Kerr who also made to our list of Most Beautiful women in the world, tops this list by a distinction. She is a top model from Australia who rose to prominence in 2007 as one of the Victoria’s Secret Angels. Kerr was the first Victoria’s Secret model from Australia and also later represented the Australian department store chain David Jones. Kerr has launched her own brand of organic skincare products, KORA organics.

Miranda began her modelling career in the fashion industry when she was just 13, winning the 1997 Dolly magazine model search competition. Since 2008, Kerr has consistently ranked on the Forbes list of highest paid models in thr world.

‘Kulhad’ to replace plastic tea cups at all railway stations

Govt to hold talks with farmers today in Delhi

Govt to hold talks with farmers today in Delhi